I dreamed of the Emerald Isle throughout my childhood.  A truly gifted bard, my Irish grandfather ignited my imagination with his stories. He had actually been to Cork to kiss the famed Blarney Stone. And so, during the early 1990s, I made my pilgrimage as well.

When I disembarked the English ferry and stepped on Irish soil, I carried with me my picture postcard dreams.  I longed to see the rolling green hillsides that spilled down to sweeping shorelines.

With high hopes, I began my journey by car.

I was sorely disappointed.  All those beautiful lanes were circumscribed by old stone walls and hedges–hedges that made it impossible to see any distant horizon from my car window.Instead of reveling in the open countryside, I saw only the road immediately before me…and the hedge.

I suppose hedges serve a purpose.  Sheep and other cattle cannot wander off, and farmland is protected. Yet, it certainly frustrated the tourist in me. I couldn’t easily explore the countryside or even enjoy the view because of those verdant barriers.

And although I hate to admit it,  I spent much of my journey complaining about them.

Yet, in recent years, I have discovered that God often uses thorny barriers to direct my life.  In fact, those exasperating and uncomfortable walls frequently protect me.

In 2002, I hit a particularly thorny patch. Skipping along a beautiful and sunny path, I thought I knew where God wished for me to go.   Everything seemed pretty straightforward.

But then, I hurtled into a huge hedge. 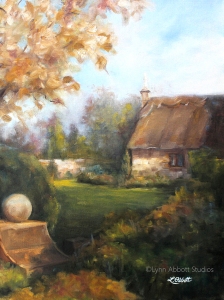 During a routine mammogram, my physician discovered something suspicious, and ordered a needle biopsy.   I agreed to the procedure although I was convinced that the physician was merely an “overly cautious idiot.”

After all, a medical scare was inconceivable.  I had too many responsibilities to fulfill, and life had dealt me too many other challenges. I didn’t have time or energy for anything more. God wouldn’t ask me to face an enormous health issue on top of everything else.

I asked everyone I knew to pray, and then, wrote the whole thing off as one of those life interruptions that everyone must face.

Yup, you guessed it. The biopsy was an enormous nuisance.

That needle stopped me in my tracks. Everything about the procedure went wrong.  The anesthetic didn’t take, and the techs had to make two passes to acquire the necessary tissue sample.

In fact, during the first attempt–without the benefit of working anesthetic–I literally hit the roof. Then, in the days that followed the biopsy, I ran a low-grade fever. I was not a “happy camper.”

Despite all of this, that story had a happy ending:  pathology pronounced the tissue benign, and we all breathed a sigh of relief.

Needless to say, I was absolutely convinced that I had endured discomfort for naught.  I stamped “idiot” on that medical file and put it away.

Understandably, I avoided check-ups for some time. Five years actually.  I wasn’t going to walk down that path again.  I didn’t like thorny, overgrown hedges. Those scratched and hurt.

Moms, though, have a way of talking sense into their children.  And my mother was no exception.  In early 2007,  my mother finally prevailed.

I went for an “annual” physical, and a routine mammogram soon followed.  But when the radiologist asked to speak privately with me, my heart froze.  I feared thorns.

Tears streamed as I begged him to allow me to skip the recommended “biopsy.”  He nodded compassionately, and an MRI resolved the fear factor.

However, the results raised serious issues.  The diagnosis returned– Stage III breast cancer. Even though I had initially avoided a biopsy, a pre-op biopsy was necessary.

When I arrived for the procedure, the physician looked at me and said, “I don’t know what possessed you to request an MRI, but it was the best thing you could have done.”

She explained that the mammogram revealed only the primary malignant tumor; a second, satellite malignancy was developing.   The MRI had uncovered it.

Without the MRI, the satellite would not have been discovered.  The physician concluded that the MRI had saved my life.

Would I have had an MRI without the unpleasant, needle biopsy five years prior?  No. Decidedly not.

Yet, that previous, horrendous clash with painful thorns ultimately saved me. And while I know full well from personal experience that a cancer narrative doesn’t always conclude so happily,  God obviously still had plans for me here on planet earth.

That thorny patch was not what it first appeared.  Again and again, I’ve found this to be true:  God uses the seemingly inexplicable to redirect, and when necessary, to protect me from danger.

Our High Priest sees the entire, sweeping life-scape, (Hebrews 4:15,16).  He lovingly circumscribes our path, directing us in the way we should go (Psalm 139: 5-10).  At times, He plants a hedge to prevent His sheep from wandering into danger.  Yes, a mighty fortress is our gracious God.

The apostle Paul understood God’s hedge.  Perhaps, this is why he could so readily confess, ” … for I have learned to be content in whatever the circumstances,” (Philippians 4: 11b)

Of course, Paul experienced opposition for Christ’s sake; this time, however, the opposition resulted in a dramatic detour.

At the close of his third missionary journey, Paul returned to Jerusalem. Trouble, however, met him there.

Both the Pharisees and Sadducees disputed his gospel message; they opposed Christ and so planned to arrest Paul.

With the help of an angry mob, they seized Paul and dragged him before Roman authorities that, after brief deliberation, actually inclined toward releasing Paul.

However, Paul received word that his opponents planned to ambush him. Thus, in order to avoid the lynch mob, Paul shrewdly played his trump card:  he was a Roman citizen by birth and as such, he was entitled to a legal hearing in Rome.

What had appeared a nasty barrier to Paul’s missionary calling actually promoted the good news–carrying it even to the very center of the Roman empire.

That’s right. Sometimes, a crown of thorns must precede blessings; sometimes a seeming obstacle ushers in glory beyond all that we could ask or think.

But always, God’s way brings life not destruction; His grace shelters me.  You might even say that hedges deliver God’s grace undercover.

And for this reason, I joyfully shout, “Yes, God is good; God is good all the time.”

“For we do not have a high priest who cannot sympathize with our weaknesses, but one who has been tempted in all things as we are yet without sin.  Let us therefore draw near with confidence to the throne of grace, that we may receive mercy and may find grace to help in time of need,” Hebrews 4:15,16

“And after you have suffered for a little while, the God of all grace, who called you to His eternal glory in Christ, will Himself perfect, confirm, strengthen and establish you,” I Peter 5:10

“And we know that God causes all things to work together for good…” Romans 8:28a