My love of the sea comes as no surprise to those who know me well.   After all, I called the Pacific coast home for 22 years.

Because Dad was an oceanographer, I, too, observed all things sea and shore.  The ocean shaped our lives.

For this reason, I should have known better when my husband and some of his surfer buddies invited me to chase down tidal waves that were due to hit shore at San Clemente.

A storm brewed, and those young adventurers planned to ride the tide.

Foolhardy or courageous, I agreed to go along.  Although I didn’t surf, I had grown up with surfers. All my cousins bummed around the best surfing spots in Southern California.

And I did love riding waves…body surfing was more my speed, however.

We shuffled through the warm sand on that late August day.  I dropped my towel a fair distance from the tide’s line.  I planned to enjoy a few waves, and then relax a little before our ride home.

Before walking toward the waves, I glanced up the beach which to my surprise was empty.  Empty is nearly miraculous in Southern California.

I should have taken note.

But I blithely waded into the surf.   I positioned myself to catch an incoming wave.  Suddenly, the water lifted me.

But it was no ordinary wave.  I felt myself plummeting down.  I struggled to reach the surface.

The tumultuous tide pulled me forward.  I tumbled.  The surf slammed me against the sand, and lifted me again.

Fortunately, after several minutes I found myself in shallower water… and the tide pulled back. I scrambled.  I had no intention of remaining in that spot long enough to experience that next wave.

When I pushed myself up from the hard, wet sand, I immediately staggered toward the soft, warm safety of my towel.

Had anyone seen me as I emerged from the water, they probably would have mistaken me for a muddy Michelin man…so filled with sand was my one-piece, racing suit that my appearance was temporarily transformed.

Yup.  I know firsthand the power of the sea.  It pounds the shore with stubborn regularity.  Its power to transform lies in its persistence.

Stony cliffs stand impenetrable.  Or so it seems.

Dad often described the lengthy process of erosion.  Sea pushes back the shore.

The waves pound year after year.  Gradually, it carves the cliffs.

Me?  Not so much. Through Christ, Abba’s Spirit grants you and I to effectively change life on the ground.

Abba invites me to enter His command room through prayer.  Christ encourages you and me to “Ask, and it shall be given to you; seek, and you shall find; knock and it shall be opened to you,” (Matthew 7:7).

When we pray, our heavenly Father moves dramatically on our behalf.  He breaks down strongholds. He redirects our circumstances.  He softens hard hearts.

Christ promised that when we ask in His name or for His name, Abba honors our requests:  “For every one who asks receives, and he who seeks finds, and to him who knocks it shall be opened.”

Yet,  when I can’t see clearly or when the answers don’t appear immediately,  I grow weary and impatient.

And I start and stop.

Yup.  At times, that pretty much sums up my prayer life.

It’s tough to persevere.  Our Savior understands that.  That’s why He gave us the parable of the widow and the unjust judge.  I’m sure you remember that story.

Luke, who recorded it,  reveals its purpose upfront.  He writes of Jesus, “Now He was telling them a parable to show that at all times they ought to pray and not to lose heart,” (Luke 18:1).

Luke put it right out there.  And I’m truly relieved to know that the disciples also had a tough time persevering in prayer.

Sometimes, when other believers share their miraculous stories,  I feel that I just might be the only one who has seen a slowdown in the “miracle” department.

But apparently, the “slowdown” is as normal as low tide.

In his essay, “The Efficacy of Prayer,” C.S. Lewis references a friend’s observations, “‘I have seen many striking answers to prayer and more than one I thought miraculous.  But they usually come at the beginning before conversion or soon after it.  As the Christian life proceeds, they tend to be rarer.'”

However, as the answers to my prayers appear to slow,  I tend to fizzle.

Low tide…  And instead of rushing back to Abba for renewed strength, I gurgle around beach pebbles, and then sink in soggy sand.

I may start strong, but then, life saps my “stick-to-it.”

Anxious about all that life requires, I know I am prone to let the “dailies” absorb my time, energy and thoughts.  I run from one crisis to the next, and come to believe that there just isn’t time to talk with my Heavenly Father.

Or frequently, I drift off to sleep like Peter, James and John in Gethsemane.  Mid-prayer.

And discouragement settles like fog.  It becomes  difficult to see that my prayer makes any difference.

The situation in Christ’s story is in fact grave.  A widow in early A.D. faced tremendous hardship:  not only did she grieve, but also, she faced economic crisis.

In addition, she had little or no protection from those who flattered or swindled.  I imagine that many tried to take advantage of her reduced circumstances.

A widow certainly had no status in Jewish society.  She had lost her husband, and there was no “career” to which she could return.

Indeed, James acknowledged the depths of a widow’s distress when he wrote that pure and undefiled religion is defined by its care of both widows and orphans, (James 1:27). To be a widow was to be as alone as an orphan.

In Hebrew society, need to care for widows and orphans rivaled with contemporary culture’s concern for the homeless.

And Jesus chose to tell His parable about a widow…the anonymous woman lost in Israel’s social sea.  Her situation couldn’t have been more helpless or hopeless.

While Jesus doesn’t tell us what the specific circumstances were, He does indicate that the widow in His parable had a legal opponent.  Things had certainly come to a difficult pass.

Her opponent stood like stone.  He had taken her to court.  He evidently had no grace for a widow.

Perhaps, in desperation, she had exhausted her personal resources trying to gain justice.  Or maybe, she was already destitute when the conflict began.

Whatever the case, the widow turns to a local judge.  His reputation, however, would have put most off.

Another stony obstacle.  The judge would not likely show mercy or grace.

Yet, this corrupt judge was evidently the widow’s only, remaining hope.

Thus, she pleaded for protection, day-after-day…

She  pounded persistently on that judge’s door.  In fact, she generally made a nuisance of herself.

Day after day, and perhaps, even month after month, she knocked on the judge’s door.

Jesus tells us that over time, the judge grew weary of her cries.  Hard as he was,  the unjust judge was moved by her unremitting pleas.

The judge relented.  He actually agreed to legally protect the widow simply to silence her.

His essential nature hadn’t changed.  He was still stony. However, the persistent waves had carved a path; the pounding surf created a safe harbor.

At this point in His story,  Jesus dramatically contrasts the judge with our loving Heavenly Father.

Our Savior’s conclusion is a straightforward:  if the corrupt judge can be moved by the widow’s persevering plea, then prayer will certainly touch the heart of our loving, gracious God.

Christ said, “Or what man is there among you, when his son shall ask him for a loaf, will give him a stone?  … how much more shall your Father who is in heaven give what is good to those who ask Him!” (Matthew 7:9, 11b).

Although at times it appears that Abba  delays, our prayers do make a difference.  Jesus encourages us to pray at all times and to not lose heart, (Luke 18:1).

Abba will indeed open a pathway for His children.  He protects and provides.

Yes, at low tide, I especially need to seek my heavenly Father.  I follow the gentle outgoing stream to His throne room.

Low tide thus reminds me to prayerfully acknowledge my dependence on God.

Of course, at times, God miraculously and immediately answers prayers.  His defense of His child may strike as suddenly and swiftly as a landslide along Pacific Coast Highway, (Luke 18:7).

And the walls of Jericho crumble.

God is more than able to swiftly redefine the landscape; He softens the hardest of hearts.

But He also allows cliffs to erode gradually.

Daniel prays daily for his people.

The widow knocks at the judge’s door.

Indeed,  life’s stony obstacles drive me back to my heavenly Father.

And I suspect that is exactly the point. 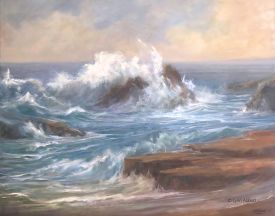 Just as the waves initially appear broken by the rocky shoreline, we can become discouraged.  But the waves return to the sea and gather renewed strength.

Yes, Abba sets both high and low tide in motion for my good…

Indeed, not only does Abba long to answer our requests, to use our intercession to carve life’s landscape, and to mold circumstances for our good– but He also uses prayer to transform our hearts.

I confront the stony shore.  But Abba gently calls  me.  He mercifully pulls me close when I run to Him.

In my Heavenly Father’s embrace, my faith gathers strength.

Prayer, then, propels life’s high tide while the predictable low tide draws us back to Abba.

My geologist dad would have been quick to point out that as the surf erodes the shore, minerals also find their way into sea water.   The tide carries those nutrients out to sea.

In this way, the ocean is refreshed and enriched.   Sea life grows.

In much the same way, prayer shapes our hearts.  Abba may ask us to persevere. But as we do, God gifts us with His grace, the “mineral” needed for our growth.

Prayer transforms circumstances and simultaneously enriches our souls.  I don’t always see it, but those so-called delays yield abundant life.

God hears; He answers our cries and orchestrates our best.

Unlike the judge in Christ’s parable, Abba responds to our distress.

And His compassion for His child?  New every morning, (Lamentations 3:22-23).

His promises are sure.

Isaiah confirms it: “The grass withers, the flower fades, But the word of our God stands forever,” (Isaiah 40:8).

In this, we find hope: Abba directs both low and high tides.

What a difference it makes…

For without a doubt,  we know that our omnipotent God loves us with a love that is deeper and wider than any ocean.

Day after day.  Year after year.