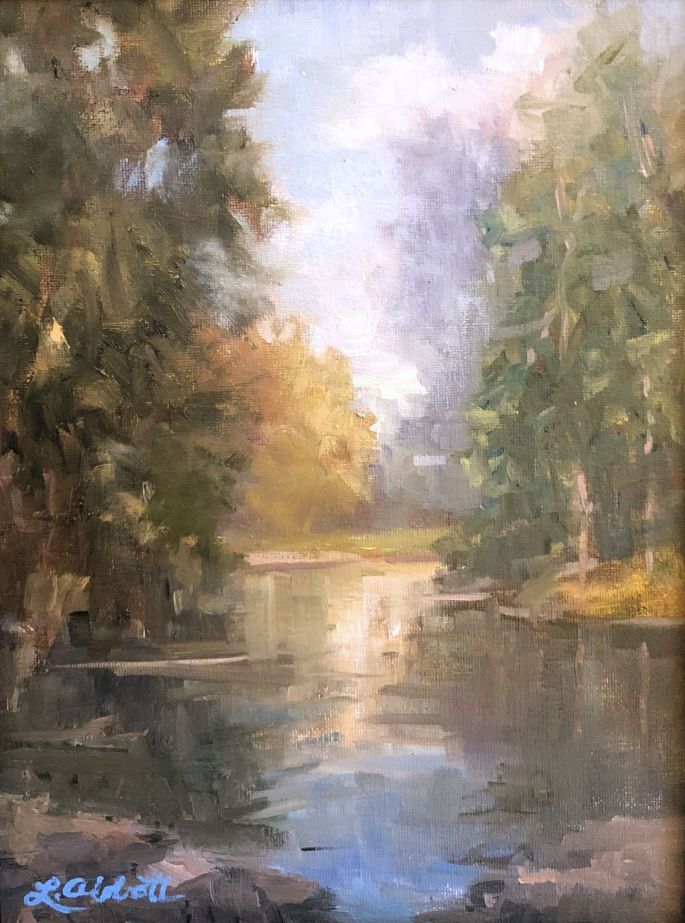 I have never been particularly courageous even though, as a child, I pretended to be.

My ruse must have been fairly successful because one early December, just before Christmas, my neighborhood friends designated me “the leader.”

You know how that works. Childhood games depend upon “Following the Leader.”

This particular Saturday afternoon, I was sporting my new Kelly green, banana seat bike.  It was my dream vehicle, and a recent Birthday present.

Or that game of “Follow the Leader.”  In my effort to prove my bravery, I overshot the handle bars of my new bike.

Yeah. I really outdid myself.

The gymnastics that I asked that Kelly green machine to perform were truly amazing.  I sped down the street with all kind of twists and turns.

I glanced back to see that the others were following just before I attempted my boldest move.  I suddenly and sharply turned the handlebars.

The outcome? I hurdled headlong and hit the cul-de-sac pavement.

I gasped for air, and tried to push myself up with an indifferent air.  However, a bright piece of enamel glistened on the pavement.

Tears began to flow despite my best efforts to  hold them back. I had blown my cover.

I was no Evel Knievel.  And I had failed miserably as the “leader.”

I scooped the piece of my shattered tooth from the asphalt, and ran home lickety-split.

Never mind my bike.  I had lost a significant chunk of my tooth…and reputation.

My mother was surprisingly calm, but my father, who was extremely ill at the time, hurried into the kitchen at his own peril to see what the commotion was all about.

“What is it?” He sputtered and then, immediately passed out on the linoleum floor.

Mom displayed true courage that day.  And presence of mind.

She sent my brother to retrieve the bike, helped Dad back to bed, and packed me up in the car for an emergency trip to the dentist.

As you can well imagine, I approached my bike more cautiously from that day forward.

Indeed, I think that after that I began to approach a good many things more cautiously.  After all, although the world can be a magical place, it also can be quite dangerous.

As in the case of J.R.R Tolkien’s Frodo Baggins,  my life’s journey has vastly differed from my youthful daydreams.

All those adolescent plans to change the world?

And as if to add injury to insult:  this world is full of uncertainty, danger, pain and suffering greater than that of a broken tooth.

Sometimes, I just want to run home…to find a safe place to hide.

I dream of slipping away to a small, tucked away village in the alps.  In such a place, I could leave the cares of this world behind me.

I’d retreat to Tolkien’s Rivendell if that were possible.

But most of the time, life doesn’t allow you and me to run away from all that frightens us.  Thus, I frequently echo Frodo’s words, ” I know what I must do, it’s just that… I’m afraid to do it, ” (Fellowship of the Ring, 2001).

I feel so very small and the journey appears so vast and terrifying.  I feel helpless to do anything that will make a difference.

So much for the confidence inspired by metallic green paint and a banana seat on  that distant day in December!

In fact, if I’m to be perfectly honest, I have to admit that in recent weeks, this world has appeared to me to be especially filled with heartbreak and fear.

I have been especially overwhelmed and have longed to run home.

It could be that tragedy has touched your life personally.

You or a loved one faces illness, betrayal, fractured relationships, financial meltdown, grief…

You’ve experienced that “knife in the dark.” And you want to run “home.”

Or it could be that you watch helplessly as others engage in futile battles. You long to carry their burdens as they make their impossible and unexpected journeys.

You gasp as evil appears to march unchecked.  The Shadow grows.

And the timing of it all seems especially poor given the fact that this is supposed to be “the most wonderful time of the year.”

Nevertheless, like me,  you put on your bravest face as you hurdle over life’s handlebars.

There are not many Evel Knievals among us.

As my dearest friend is so quick to remind me, hobbits must sometimes carry heavy burdens.

Funny how it works that way.

God seems to prefer to light small candles rather than to fire up the powerful searchlights.

Hope arrives in small packages. Courage appears in the most unlikely moments.

Or to put it yet another way, God chooses the “foolish things of this world to confound the wise,” ( I Corinthians 1:27 ).

Throughout human history, the worldly insignificant, the wildly imperfect, and absolutely fearful  have populated the cast of Abba’s epic, gospel of grace.

I’m especially reminded of this during the Christmas season.   Reading the opening chapter of Matthew’s gospel, I note the broken, the weary, the frightened and the imperfect that comprise the Messianic line.

Of course, the purpose of the genealogy  in Matthew serves to establish Christ as the promised King, of the line of David.

However, a look at the lives of many of those included in that genealogy reveals God’s heart of love and grace.

Many of their stories demonstrate Abba’s great love for those of humble circumstances. He loves and lifts the broken, the frightened and weary. And by His grace, they found a place in the genealogy of the promised Messiah.

As I review Matthew chapter one, I see Abraham’s name on the list and I recall his many failures, his doubts and fears.

Rahab, the prostitute who sheltered Israel’s spies in Jericho, also makes the list.

And Ruth, the young woman from Moab and convert to Judaism, also appears.  From a human perspective, she seems an unlikely choice for Messiah’s line.

Yet, to Ruth was born Obed; to Obed, a son named Jesse, was given.

And to Jesse?  David, the shepherd boy.

We remember David as a king.  However, God’s choice initially puzzled both David’s family and God’s prophet.

Left behind to care for the sheep when Samuel invited Jesse and his sons for consecration, David had to be called from the fields. Jesse evidently didn’t think it necessary for David to attend.

Even so, God assured Samuel that the overlooked David was God’s choice “…for God see not as man see, for man looks at the outward appearance, but the LORD looks at the heart,” (I Samuel 16:7).

Of course, as we review Messiah’s genealogy, we certainly cannot forget Joseph, the carpenter and step-father of Jesus.

Nor can we ignore Mary, likely a young teen, when God chose her to carry Christ. Significantly, she hailed from Nazareth, about which later was said,”Can any good can come out of Nazareth?” (John 1: 46).

Both Joseph and Mary feared, and from a human perspective, rightly so.  The world in early A.D.  was truly a frightening place.

Violence, as a result, frequently broke out in the streets only to be crushed by Roman soldiers whose cruelty inspired terror. Cruel might made “right.”

Among her own Israeli people, Mary faced misunderstanding, rejection and possibly a death sentence.  An unwed mother’s future was bleak.

Joseph’s  heart broke when Mary told him she was pregnant. He feared betrayal.

Rome required a census that meant a dangerous journey to Bethlehem during Mary’s final trimester.

Bethlehem.  Small, vulnerable and seemingly insignificant; yet chosen by God.

The prophet Micah had written, “But as for you, Bethlehem Ephrathah, Too little to be among the clans of Judah, From you One will go forth for Me to be ruler in Israel.  His goings forth are from long ago, From the days of eternity,” (Micah 5:2).

And Abba sent His only Son, the light of the world and living water, to the least of Judah.

Born in a stable, a baby.  Small and unimpressive.

Indeed, Christ emptied himself of glory and took on human form, submitting to and suffering death on a cross in our place (Philippians 2:5-8).

To anonymous shepherds in a field at night, angels delivered our Savior’s birth announcement.

These small and seemingly insignificant individuals and events were a part of the greatest gift of grace ever known– the coming of Christ, God incarnate, to restore humanity’s right relationship with God.

The Eternal One, the Mighty God, the Lion of Judah entered the world by way of a small, forgotten village… the least of Judah.

The Living Water poured down from the heights to wash the finite, small, stained and broken white as snow, (Isaiah 1:18).

And even when He returned to the Father, He miraculously remained with us.

I suspect that they also felt overwhelmed at times.  As do I.

Yet, as I review their lives, I see that Abba used these seemingly small and unimportant men and women of faith to accomplish His grand purpose.

Yeah, sometimes I fall down.  Oftentimes, I face plant.

However, when we face life’s darkest moments, all is not lost.  Abba lights a small candle…God with us.  Immanuel.

And that One lights us, one at a time.  By grace, His Spirit carries us.

“Do not fear,” the angel said.  “For behold, I bring you good news of a great joy which shall be for all the people; for today in the city of David there has been born for you a Savior, who is Christ the Lord,” (Luke 2:10-11).

…For all the people.

His children include  the weak, the suffering,  the broken, the disheartened, the fearful.

He is with us here.  He goes with us there.  He promised He will never leave or forsake us, (Deuteronomy 31:6).

Our Savior, Our Sovereign Shepherd has said, “Do not fear, for I am with you; Do not anxiously look about you, for I am your God.  I will strengthen you, surely I will help you, Surely I will uphold you with my righteous right hand,” (Isaiah 41:10).

As our days grow dark, we may long for escape.

In this world, we stumble. We hurdle.

We suffer. We grieve.

Naturally, we wish to run “home.”  And without a doubt, one day, a beautiful home-coming will be ours.

But for now, the Light of World goes forth… with us.

Through the seemingly insignificant, through our sometimes faltering and fearful footsteps, His light spreads.  Abba chooses the small to accomplish enormous tasks.

As the film of Tolkien’s classic so aptly suggests, “Even the smallest person can change the course of the future.”

By grace and through Christ, that which appears foolish to the world at large nevertheless accomplishes God’s vast and ultimate purpose.

And yes, the deeper the Shadow, the more perfect our Savior’s arrival.  His timing is always just right.

“And the LORD is the one who goes ahead of you; He will be with you. He will not fail you or forsake you.  Do not fear, or be dismayed,” ~Deuteronomy 31:8

“There was the true light … He was in the world, and the world was made through Him, and the world did not know Him…But as many as received Him, to them He gave the right to become children of God, even to those who believe in His name…”~John 1: 9,10 and 12.

“Let your light shine before men that they may see your good works, and glorify your Father who is in heaven,” Matthew 5:16