It was one of those weeks…You know the kind.

Every lil’ thing hits the fan.

In addition to all the little obstacles that got thrown in my path–the irritating pebbles in my shoe — the sewage pump suddenly made an alarming racket.

Translation:  sewage could potentially back up into the house.

No kiddin’… Something was very wrong.  And I was just walking out the door to an appointment at one of my art galleries.

The timing couldn’t have been worse.

As I pulled out of my driveway, I imagined kitchen disposal waste backing up into my home.  And worse.

All throughout the morning, I frantically telephoned my 21-year-old.  A typical collegian, he slept late.  But I had to warn him: “Don’t take a shower until I can contact the plumber!”

My call finally got through.  “I’m sorry, Mom,” he said.  “I didn’t hear the phone because I was in the shower…”

Too late.  I imagined mass destruction in the house.  And in the impending doom, my son would need to get out.  Perhaps immediately.

And I sent up what I like to call “Nehemiah prayers”… those quick calls for help from almighty Abba that you make when you feel your life may be at stake.  Prayers from the trenches. 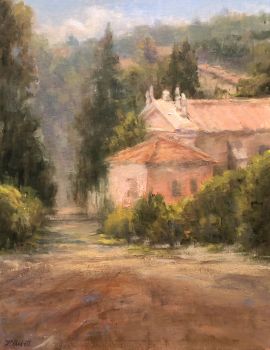 Yup.  That pretty much describes this past week.  Some weeks are like that.

It doesn’t matter how organized, or capable you are. You can plan, you can prepare. But there are just some things that catch you off guard.

Life has a way of throwing muck at you sometimes.

But when your family is threatened by potential havoc, you kick into high gear.

Especially if they are sleeping and unaware of danger.

And as a mom, the thing I hate most about weeks like that?  I can’t always protect my kiddo.

That’s when the self-blame piles up in addition to all the other “sewage.”

I think that Abraham fought similar battles from time to time.  I know he loved his family deeply. His relationship with his nephew Lot demonstrates that.

Certainly, anyone reading the Genesis account will acknowledge that Abraham and his family fell short of perfection.  But Abram nevertheless loved his, and worked at his relationships.

And that’s how Lot chose the prime real estate and moved to that infamous city known as Sodom.

Sodom, in fact, rivaled even the most outrageous of modern party cities. Every kind of hedonistic, pleasure-seeking activity could be found in Sodom.

For the people of the city, nothing was “off-limits”…all aberrations celebrated.  Rape and human trafficking were a way of life.

Fictional Gotham City couldn’t even compete. If evil could conceive it, Sodom offered it.

Evil spread like a plague in Sodom, the criminal underbelly of the middle east, and so, God decided to clean the mess up.  But first, He revealed His plan to Abraham.

“And the LORD said, ‘The outcry of Sodom and Gomorrah is indeed great, and their sin is exceedingly grave.  I will go down now, and see if they have done entirely according the its outcry, which has come Me; and if not I will know,” (Genesis 18: 20-21).

The alarm had gone off… the sewage was backing up into the house.  And God intended to clean up the mess.

Did God already know the lay of the land in Sodom and Gomorrah?

But our God is also a God of grace.  For this reason, He warned Abraham of the valley’s doom, and in this way,  offered salvation to Lot’s family.

Ironically, this announcement of impending destruction accompanied God’s promise of future blessing through Isaac.  Sodom and Gomorrah would disappear, but Abraham would  become a great nation.

A wonderful promise of future good!  But on that day, Abraham’s immediate concern for his existing family superseded all else.

He could think of nothing else.

Abraham pleaded, heart and soul, on behalf of Lot and his family.  His was a prayer for mercy and grace.

Perhaps, Abram blamed himself for Lot’s choice of citizenship.  That would certainly explain his desperate petitions.

I imagine that God smiled as He graciously acknowledged Abraham’s request.

But of course, Abraham knew that his estimate of 50 stretched things a little.  So, emboldened by his previously successful request, Abraham asked for greater grace.

What about 50 minus five?

“… Wilt Thou destroy the whole city because of five?” Abraham asked.

Excuse me, but methinks Abraham’s math didn’t measure up.  God had announced His intention to clean up an entire city of hundreds and perhaps, thousands.

Without a doubt, a great many more than five were in question.

But in his anxious absurdity,  Abraham sought to persuade God toward grace.  How little Abraham understood God at this point in the journey!

Abraham’s line of reasoning also contained a subtext of doubt.  Rather than simply ask God to spare the city for Lot’s sake, Abraham felt it necessary to build a case for grace.  This was bargaining at its best.

Abraham obviously did not yet fully trust God.

Yup. I can relate.  How often I attempt to bargain through prayer for the good of loved ones!  And in doing so, I fail to recognize that my heavenly Father already longs to be gracious to His beloved children.

Indeed, I am more than thankful for God’s patience as demonstrated in His response to Abraham’s panic.

After all, our gracious God knew Abraham’s end goal.  More than that, God had anticipated Abraham’s concern.  Undoubtedly, God  revealed His plans to Abraham so that Lot and his family could “get outta Dodge city” while the gettin’ was good.

Consumed by fear, however, Abraham missed all that.  I get that.  I can’t think straight when my fear reaches fever pitch.

And so, Abraham continued his plea for grace. Little by little, he worked his requested number down to a mere 10 in the city who followed after God.

“What about that? Would you save the city for a mere 10 people?” Abraham essentially asked.

And the Father of Grace listened patiently to His anxious child.  With each request, God agreed to Abraham’s given number, and essentially reassured Abraham that those Abraham cared about would be spared.

Grace triggered the alarm:  Sewage is backing up into the house, Lot. Time to get out-of-town.  Hit the road… Now.

Lot, of course, loved his family, and immediately made plans to protect them.   He even counseled his future son-in-laws.

But they thought it all a big joke.

That’s right.  You and I both know that you can call, but those you love have to pick up the phone.

When his future son-in-laws questioned his alarm, Lot began to entertain second thoughts.  I suspect he thought, “Maybe, they’re right.  Maybe, it isn’t that big a deal.”

Thus, when in the morning the angels once more urged him to get out, Lot hesitated.

Again, God demonstrated grace.  The angels seized Lot’s hand and ushered Lot, his wife and daughters out of the city.

In other words… No more hesitation, Lot.  Time has run out. And don’t look back. That will  place the family too close to danger.   Get as far away from danger as fast as you can.

The alarm went off.  The house, as well as those found in it, faced certain destruction.

In that moment, Lot could not lean on Abraham’s faith.  Although he had  learned much from Abraham, Lot’s day had arrived. Even though Abraham’s intercession had  secured God’s favor and compassion, Lot still needed to choose Yahweh.

Lot answered the call.   But unfortunately, he could not take the step of faith on behalf of his family members.  They, too, had a choice to make.

Genesis 19 records the family’s tragedy.  As they ran toward safety, Lot’s wife lagged behind.  It seems she reluctantly followed Lot.  In spite of all of its flaws, she loved the city of Sodom.

She may have doubted God’s warning.  Whatever the case, she looked back.  Loitering in doubt, she got caught in the firestorm’s fall-out.

And evidently, the smoke and debris were horrific.  Although Scripture doesn’t describe the devastation in specific, scientific terms, it does state that Lot’s wife “became a pillar of salt.”

Undoubtedly, the “sewage” backed up into the house, and those who ignored the alarm were caught in the wreckage.

Yet, studying Lot’s history in Genesis 18 and 19, I have become absolutely convinced that God still lovingly and graciously warns His beloved children of danger.  Again and again.

In fact, His Word–His love letter–repeatedly tells us to flee evil, and to pursue faith in Him (1 Timothy 6:11).

Perhaps, like Abraham, you walk in safety but pray for those dear to you who physically, emotionally or spiritually dwell in dangerous places.

Or you may find yourself in Lot’s situation. By God’s grace, you flee danger, and seek to rescue those you love as well.  After all, when you love, you do everything you can to protect your beloved.

My recent take-away from Lot’s story, however,  is that although I may do all I can to protect those I love, I cannot make their choices for them.

Each person must individually respond to God’s call.   I may frantically seek to help. I anxiously alert them.  I definitely pray. Sometimes, like Abraham, I even erroneously attempt to bargain with God.

They must embrace a no hesitation, pull-out-the-stops, full-on kind of faith.

And grace that would rescue an oblivious and indifferent Lot and family inspires that kind of faith.

Indeed, Christ, who walked the Via Delorosa to rescue those who sleep through the alarm, deserves my trust.

Did Lot blame himself for his wife’s demise?  He may have.  After all, he was only human.

But Lot was not to blame for his wife’s choice any more than Abraham was to blame for Lot’s choices. The Word of God clearly teaches that the faith walk requires a personal decision for God.

And so it follows that you and I are not ultimately to blame for our loved ones’ choices.

We pray for those we love; we teach and encourage.

But we must also note that grace both saves and allows freedom of choice.

Abba loves us.   His love and grace are beyond anything we can fathom.

As He was with Abraham, He is truly patient when we fail to fully understand Him. He gives greater and greater grace.

Yet, in His infinite love and wisdom, He  grants free choice.  He does not force faith.

Instead, He urgently calls.  He takes us by the hand, and by grace, He provides a way of escape (1 Corinthians 10:13).  Then, He awaits our response.

“Behold, God is my salvation, I will trust and not be afraid; For the LORD GOD is my strength and song, And He has become my salvation,” ~ Isaiah 12:2