This past autumn I celebrated the miracle of life.

No, I’m not talking about a tribute to the Right-to-Life Movement, or even about the birth of a child.

I’m referring to my other half’s ongoing patience with me . . .

You see, my marriage represents a major miracle; in fact, it’s a miracle that after 31 years, my husband and I haven’t murdered one another.

Regardless of whatever you call us, if you spend any time in our home, you’ll find yourself acknowledging that we’re a long shot.

And I’m not referring to simple differences in toothpaste habits. It’s much more substantial than that.

Indeed, it’s obvious to anyone meeting my husband for the first time that he is ideally suited as a franchise owner of a Quick Service restaurant. He is always on the move.

And I pity anyone left in his wake; after all, I’ve been there many a time.

But one will do anything for love, right?

Thus, over the years, I have sincerely tried to overcome my poky nature. I can distinctly remember my husband urging me to hurry to Subway one Saturday morning. If we were to make the most of that unseasonably sunny day, we must get an early start.

So off we dashed, or rather my husband hurried. I panted along behind him.
I caught my breath after we jumped on a train headed for the city.

But once the train stopped, the mad dash began once more.  My husband sprang to check the arrival boards.

“If we run, we can catch the next train downtown,” he cried.

I collapsed in the seat next to him on the appropriate train five minutes later; I thanked God for an opportunity to rest.

However, my relief was short-lived. The doors opened and the hare disappeared into the crowd, darting up the escalator . . .I toddled along behind.

When we emerged from that subway hole, the hare looked for the nearest cafe.

“I’m tired,” he admitted, “let’s stop for something to eat.”

I gratefully agreed. And after savoring a scone and sipping English Breakfast tea, I felt rejuvenated. I smiled contentedly and expectantly looked to my other half for the day’s itinerary.

My husband, however, had experienced enough adventure for one day.

It was 1 pm, and I protested, “But we’ve only just arrived!”

I blinked, and he was gone. Left with very few options, I shuffled along behind him.

And that’s how it is. He does everything fast–eating, talking on the phone, changing his shirt. He’s the poster child for multi-tasking!

In addition, it doesn’t take a Sherlock Holmes to follow the trail of crumbs and clothes that my spouse leaves behind.

But that’s actually good news because although at times this tortoise may get left far behind, she fortunately has a clear Hansel and Gretel path to follow home.

Yup. That’s what happens when the tortoise marries the hare.

Such differences can make life a bit uncomfortable at times.  And let’s face it, most of us spend our lives not only chasing comfort but also avoiding discomfort. 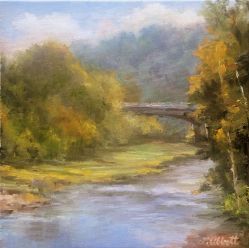 Perhaps, your “hare” isn’t your spouse.  Maybe,  your tests come via a boss, a child, an acquaintance, a fellow church member, a neighbor or even someone you encounter on the day’s drive.

If you’ve experienced the conflict, you understand the oyster’s self-protective instincts.  Some create pearls; others build walls.

Some people even go so far as to say, “You stay on your side of the river and I’ll stay on mine.”

Yeah. It’s certainly easier to associate with like-minded folk.  I totally get that.

Maybe, that’s because I’m a tortoise who loves a hare.  And keeping up is frequently uncomfortable.

Quite honestly, throughout history, humanity has muddled its way through differences and the often resulting conflict.

And as a result, like poet laureate Robert Frost, many have concluded that “good fences make good neighbors.”

Yet,  Jesus had a way of turning conventional wisdom upside down.  And He had a lot to say about how we should respond to our differences.

You know the parable well. Even people who do not follow God, know the story.  I suspect it is one of the most well-known stories that Jesus told:  the Good Samaritan.

Of course, any early century Israeli would have balked over the juxtaposition of the words Good Samaritan.  Samaritans were actually part Jew.

Because of its central location in the ancient world, Israel had been overrun by many empires. God’s prophets had actually predicted the nation’s captivity again and again.  They reminded the people that if they ran after pagan gods, they would step out of Yahweh’s protection.

It happens even to the best of us. Israel wandered away from God. Nations like Babylon invade and many Israelis found themselves living outside of Palestine like Daniel and his friends, (Daniel 1:1-7).

However, the remnant left behind scraped out their living from the Judaean rubble.  In addition, despite the Mosaic Law’s prohibition, many married non-Jews.

Of course, God had warned that intermarriage would lead to religious compromise and even apostasy; the people would eventually adopt the pagan practices of their neighbors.

Such, in fact, had been the case.  Thus, although the Samaritans maintained their belief in Yahweh, they had also compromised much.

This, then, is the cultural context for Jesus’ conversation with the Samaritan woman whom He met at the well.   The woman asked Jesus about worship because Samaritans did not worship in Jerusalem but rather in the former pagan “high places.”

I suspect that worshiping in Samaria with those like themselves was easier than  attempting an arduous journey that would most certainly yield censure by their Israeli cousins.

As she spoke with Jesus, the Samaritan woman openly acknowledged the disagreements and animosity that existed between Jews and  Samaritans.

In light of this, I think it likely that the conscientious teacher of the law who questioned Jesus in Luke 10 also shunned Samaritans.

Yet, he seemed sincere in his faith in God as evidenced by what appears his direct and honest question: “Teacher, what must I do to inherit eternal life?”

Jesus praised his answer, but followed commendation with this challenge: “Do this and you will live,” (Luke 10:28).

It was a troubling statement.  The lawyer probably wondered how far to take such a command.  After all,  good fences make good neighbors.

Loving the lovable…no problem.  I’ve got it.

Loving those who agree with me…I’m there.

Working with those who pursue the same goals and dreams, who espouse my values…Easy peasy.

But that oddball neighbor?  You must be joking.

I imagine the lawyer paused awkwardly before he sought to justify or excuse himself.

In that moment, the atmosphere shifted from mildly uncomfortable to downright convicting.

Jesus’ parable presented the following conundrum: A victim of a robbery gone bad suffered horrendous injuries. Deprived of his travel monies, stripped of his clothing and beaten, the traveler had been left for dead on the side of the road.

And for any compassionate passerby,  personal safety was a consideration. . . the criminals could potentially ambush anyone who stopped to help.

Helping also meant subjecting oneself to extraordinary inconvenience.  Such care would certainly delay any business for that day or more.  In addition to all of this, the victim’s recovery was not guaranteed.

Jesus’ listeners could certainly provide numerous reasons for leaving well enough alone.  Thus, the fact that the priest and Levite hurried past the injured party would not have seemed an improbable reaction to a dangerous and inconvenient situation.

Lest his listeners excuse the priest and Levite as simply preoccupied, Jesus noted the men’s choice to deliberately avoid the victim;  each potential savior crossed to the other side of the road.

Definitely a case of…You stay on your side and I’ll stay on mine.

Shocking.  A man rejected by his Jewish cousins took pity on an injured Jewish traveler who had been cast aside.

Through this powerful narrative, Jesus differentiated between those who embrace grace and those who choose “ungrace,” as author Phillip Yancey once nicknamed it.

At the conclusion of the parable, the lawyer who prompted it correctly identified the one who loved his neighbor as one who embraced the uncomfortable and inconvenient; the one who demonstrated mercy.

Two thousand years later, I also acknowledge a Samaritan who willingly  stepped out of his comfort zone.  And it hits home.

Grace reached out even when things got messy.

And grace still looks beyond differences to common needs.

It crosses the divide.

It bridges the gap.

Obviously, the injured man had nothing to offer the Samaritan.  If anything, a history of mutual prejudice stood between them.

Yet, the Samaritan’s understanding of God’s mercy had evidently moved from the academic to the practical.

The Samaritan understood what it meant to give even when it was extremely difficult, uncomfortable or inconvenient.

That’s the kind of love God demonstrates toward us, (Titus 3:3-7). And in fact, when you and I fully comprehend the depth of God’s mercy toward us, our gratitude will overflow in love and grace toward others, (1 John 3:1; 1 John 4:19).

Jesus modeled such compassion again and again.  He ate with corrupt tax collectors; He spoke kindly to prostitutes; He spent time with the outcasts.  He patiently taught and forgave those who disagreed and even crucified Him.

Does that mean He approved corruptions, and prostitution?  No.  We know that our Savior did not condone sin.

However, in grace, Jesus served those who had rebelled and even those who would reject Him.

Yes, love sees individuals not labels. Love sacrifices personal rights in order to forgive. It looks beyond the offense and sees a person whom God loves.

I don’t have to agree with all those I meet.  But Paul reminds me that following Jesus means I will adopt Christ’s attitude toward others (Philippians 2:5).

It’s true.  In this world, I will meet many with whom I disagree.   And without a doubt, agreeing with everyone I encounter is impossible.

However,  I am to be like-minded with Jesus.

And that means seeing others with Jesus’ eyes of compassion and grace.

It isn’t comfortable.  I know that beyond doubt.

Having given His life for us, Jesus understands that better than anyone else.

But as you and I  begin to truly see ourselves in light of God’s mercy, it will become easier to extend grace to others.

And that’s what makes it possible for a tortoise and hare to love one another for the long haul.

“If you have any encouragement from being united with Christ, if any comfort from His love… then make my joy complete by being like-minded, having the same love, being one in spirit and purpose…Your attitude should be the same as that of Christ Jesus…” ~Philippians 2:1-5