Two sightseeing nuns on a warm Sicilian day, eyed the massive ruins of a Greek temple.

I know because I stood behind them. Armed with my Konica camera, I attempted to frame a prize-winning shot of the archeological wonder.

I smiled as, with Polaroids poised, they leaned as far as they could over the small wrought-iron rail that separated visitors from the temple. They evidently wanted a close-up.

Suddenly, to my great surprise and amusement, they lifted the skirts of their long black habits, and scrambled over the railing.

I had to stifle an irreverent laugh. The situation was comical at very least.

One thing, however, perplexed me:  a small black and white sign graced the fence.  I couldn’t read Sicilian, and so I pulled out my pocket dictionary in an attempt to decipher it.

When I broke the code, I laughed until tears streamed.  Translated, the sign warned, “Do NOT Enter!”

To this day, I don’t know whether those nuns climbed the fence in ignorance or in defiance.  But I must say that it is comforting to know that even those who commit their lives entirely to godliness sometimes jump the fence.

And having translated the sign, I was relieved that I didn’t blindly follow those two on that particular day.

Even so, I have fouled up on other occasions.

Most of us stumble at some point or other… and often, after our greatest victories.

We may live through many down and difficult circumstances.

We obey God when it is hard.

We climb that fence.

It happens to the best of us.

Most of us stumble at some point or other… and often, after our greatest victories.

Maybe, that’s why I especially thank God for grace.  And why I love Scripture’s account of Simon Peter.

At first glance, Peter certainly qualifies as a committed Christ follower.  Most would say he was “all in.”  The book of Matthew notes that Peter and his brother Andrew were the first called disciples.

In fact, Peter and Andrew immediately dropped their nets and joined Jesus.

And Peter climbed out of the boat. 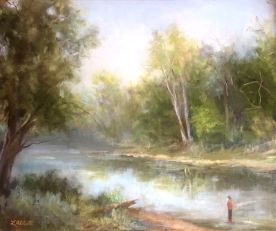 Peter was literally “all in.”

He was the first to respond to Jesus’ question, “Who do you say I am?”

He volunteered to build a tabernacle on the Mount of Transfiguration.

He reverenced his Savior to such a degree that he initially refused to allow Jesus to wash his feet.  But when told that the foot-washing was necessary in order to identify with Christ, Peter again jumped in …feet first, of course.

Who can forget the Peter who drew the sword in Gethsemane? In wild fervor, Peter cut off the ear of one of those who came to arrest Christ!

Peter was literally “all in.”

Truly. No one could doubt Peter’s love and loyalty.  Peter followed Christ with all his heart and soul.

But, in fact, we know the story well.  Peter, although ready to fight in the garden, succumbed to fear in the temple courtyard.

Luke tells us that when the rooster crowed,  Jesus simply looked at Peter.  In that moment, Peter recognized his faith’s failure.

It isn’t surprising, then, that Peter–the disciple who loved the Savior with all his heart–went outside and “wept bitterly,” (Luke 22:62).

Such was Peter’s heartbreak and remorse.  I certainly relate to that.  While I have not denied Christ in the temple courtyard, but I have deeply disappointed my Savior in other ways.

Yes, Peter ran from the temple court and wept bitterly.

When I was a young Christian, I thought that promises of forgiveness and future service after failure were primarily reserved for those who messed up before they knew Christ.

After all, many of those who testified to grace spoke of failings that occurred prior to conversion.  For this reason, I mistakenly believed that if I failed after receiving Christ I would no longer be useful in God’s kingdom.

Thus, when I found myself in a scrape, the enemy condemned me.  “God will never use your life for Him now…” came the fiery accusation.  “You are done for,” Satan snickered.

“Had you messed up before you knew Christ, this might have served as a testimony for God’s redemption of your life,” the liar suggested. “But as it is, God won’t bless you now.  You’re saved, but shelved.”

And I sobbed.  I wished to follow Abba, and when I let my Savior down, I felt I destroyed any opportunity of serving Him.

Fortunately for you and me, Peter’s early morning failure on Good Friday isn’t the end of the story.

Some days after the resurrection, Peter, John and a few others spent the night fishing on the Sea of Galilee.  The night passed and still nothing to show for their efforts.

In the early morning, a man on the shore suggested they cast their nets on the other side of the boat.

Of course, their nets filled with so many fish that they could not haul in the catch.  They knew only one who worked such miracles.

John was the first to recognize Jesus.  But Peter was first out of the boat.  Predictably, he jumped into the water and swam to shore.

Peter’s courage had failed, but his love for Jesus remained.

Peter took the plunge.  Quite literally.

After breakfast, Jesus turned to Peter with a question:  “Simon, son of John, do you truly love me more than these?”

Jesus, of course, knew Peter’s heart.  He didn’t ask because He needed information.  No, it wasn’t about Jesus’ need.  It was all about grace.

Fortunately for you and me, Peter’s early morning failure on Good Friday isn’t the end of the story.

Peter simply needed a reminder of his first love for his Savior.   Jesus asked “Do you love me?” three times.  And just as Peter had thrice denied his Savior, Peter also reaffirmed his love…three times.

Greek scholars tell us that the word for love used by Jesus was agape.  In the Jewish faith, agape represented the highest form of love.

In other words, Jesus significantly asked whether Peter loved with all his heart and soul.

Peter answered hesitantly. His heart broke under the weight of his recent failure.   His confidence shattered.  He was no longer certain.

As a result, Peter answered Christ’s question substituting phileo for agape.  He doubted the depth of his love for the Savior.

His honest repentance is evident in his words, “‘Yes, Lord,’ he said, ‘you know that I love (phileo) you.'”

Phileo actually refers to brotherly love or affection.  Peter felt he could no longer boast agape for Jesus; Peter knew he had failed and thus, he claimed only phileo.

The Peter who once boasted that he would never deny Jesus now doubted himself.

Yet, with each question and with Peter’s every affirmation of love, Christ repeated, “Feed my sheep.”

Peter’s midstream mire did not ultimately disqualify him from the race.

Grace accepted Peter just where he was.  In fact, when Jesus inquired the third and final time, He adopted Peter’s word, phileo.

In this way, Jesus seemingly said, “You don’t feel worthy?  Never mind.  You love me.  You don’t feel your love is enough?   I’ll meet you where you are.”

Peter’s midstream mire did not ultimately disqualify him from the race.

Jesus looked into Peter’s heart and saw a broken and repentant child who deeply loved his Savior. And apparently, that loving, repentant heart– not perfection– is the primary prerequisite for serving Abba.

Yes, through Christ, by faith, we receive daily grace (Lamentations 3:22-23).

And Peter became the leader of the early church.

Indeed, this same Peter, who once denied Jesus,  wrote, “And the God of all grace…will himself restore you and make you strong, firm and steadfast,” (1 Peter 5:10).

Grace forgives and restores, (1 John 1:9; Romans 8:1).  For this reason, when we willfully or unwittingly topple over fences, Abba picks us up and celebrates His prodigals’ return.

He never gives up on you and me.

We may falter, but Abba is absolutely all in.

“…if we are faithless, He will remain faithful, for He cannot disown Himself,” ~2 Timothy 2:13